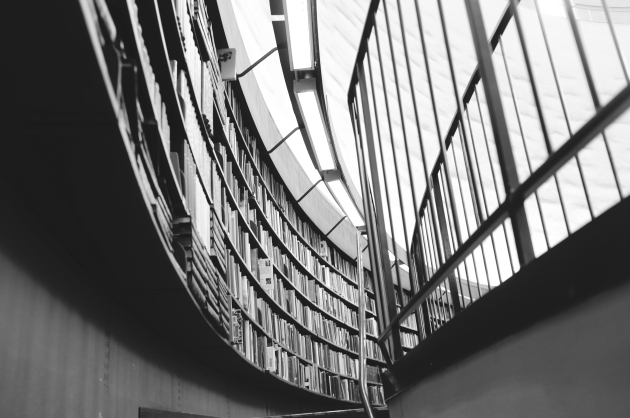 I managed to avoid getting summoned for jury duty for the first eight and a half years of my adult life, but in January 2016 they finally caught up with me. I took the day off work, arranged a ride out to the courthouse (the summons was sent to my parents’ address, meaning I had to go to county court rather than the much-more-conveniently-located city equivalent), and carefully ironed my most comfortable business-casual outfit. But I didn’t realize that you’re supposed to call the night before to find out whether or not you actually have to show up. I thought “letter in mail” = “go to courthouse or get arrested”. No, I didn’t bother reading the entire letter, heh heh. Oops.

Long story short, I was stuck in the suburbs until my ride came, which meant I had about six hours to kill. Fortunately, though, the very nice main branch of the county library is just down the street from the courthouse, and it had been a while–since college, really–since I’d engaged in the glorious activity of sitting in a library, going on the internet, and wasting a bunch of time you could have used to do something actually productive.

Rolling into the library right when it opened was pretty cool, and I was soon busily engaged in making a website for my latest business idea–some variation on my usual theme of trying to fix people’s bad writing. This doesn’t particularly interest me, and previous attempts at becoming some sort of freelance copyeditor-lite had failed, mostly because I was, well, not that interested, and could never follow through beyond setting up a website. But every time I tried to think of a career I could start without an expensive graduate degree, this was all I could really come up with. And so, I kept coming back to the same thing and then abandoning it in a vicious cycle.

But today was destined to be different. Somewhere in the course of some googling I stumbled across Sell Out Your Soul and was instantly captivated. It’s a career advice site written by a guy who dropped out of an English PhD program and became an internet marketing writer. As I read about the first part of his career journey–becoming frustrated with academia and leaving to search for something else, but not really knowing what that something was, and subsequently getting stuck in an unfulfilling, low-paying, low-status job–it hit really close to home.

When I was a freshman in college, I thought there was no one on campus more fascinating or impressive than the grad students. Dreamy men and sophisticated ladies, wearing giant glasses and long wool coats and carrying cups of coffee. Teaching for 45 minutes and then spending the rest of the day hanging out at the library, writing genius things about fascinatingly arcane topics. Fresh out of the suburbs, where most people’s focus seemed to be “GO SPORTS TEAM,” buying SUVs, and popping out babies, and where–let’s be real–I was and still am a huge weirdo, I felt like I’d finally found where I belonged. Those grad students were older and better versions of me. They were who I wanted to become.

And that was my goal, for most of college. That’s why I didn’t think too much about my future career, why I didn’t try very hard to get internships, why I clung so tightly to school and largely ignored the outside world. I just needed to do well in my classes, and maybe get to know a few professors, and I would advance. The future seemed simple enough.

But as I got older, academia gradually lost its shine. As a creative writing major, I was required to go to fiction and poetry readings, and I came to hate them. The authors were unbearably pretentious and their work was incredibly boring, written, it seemed, primarily to impress other writing professors, devoid of any sort of creative risk. Aaaand suddenly my plan to get an MFA didn’t seem like such a good idea. I managed to weasel my way into hanging out with some of the dreamiest grad students, working on some of the most arcane topics, and it turns out that they were universally miserable. Like, seriously depressed and becoming alcoholics to cope with their problems. Huh, maybe my backup plan, getting a PhD in English or German literature, was not the best.

And at the same time, I was getting more and more into metal and going to concerts, and this pulled me back out into the real world. I met people who didn’t go to college and didn’t plan to, and I liked them a whole lot better than most of the people I met at school. Sitting in class, watching my sheltered, scatterbrained professors and my homogeneously dressed, well-connected classmates talk about dead-white-man literature for 3 hours straight while I was absolutely bored out of my mind, I realized that this wasn’t who I was anymore–and maybe it never quite had been.

And so, by the beginning of my senior year of college, though I didn’t realize it at the time, I was basically starting over. My work experience consisted of serving food at a retirement community on school breaks, and a low-level student employment gig at the library. I didn’t have a network outside of academia. For the first time, I was facing the situation I would continue to grapple with for the next five years: I could get an expensive master’s degree for some sort of professional certification (probably teaching), or I could figure something else out. And in the meantime, I had to support myself.

Sell Out Your Soul

Several dead-end jobs and an okay barista career later, this brings me back up to that day in the public library. Everything James Mulvey wrote about his experiences echoed my own–the initial lofty ambitions, the creeping disillusionment with academia, the abrupt entrance into the real world, the floundering, the feeling of having failed. But, unlike me, he’s come out on the other side. Clearly he had something figured out that I didn’t.

While James has some good information available for free on Sell Out Your Soul, I saw that the bulk of his career advice lies in his $25 ebook. As I said earlier, he does internet marketing, sales, that kind of thing. I’ve never wanted to touch marketing with a ten-foot-pole, and I kinda figured his book would be, at best, a guide to getting a job like his, and at worst some typical “How to make million$ by $pamming everyone with link$ to Amazon product$!!!” waste of time. But, intrigued by what I’d read so far and encouraged by the good reviews, I decided to go for it. When I got home from the library I pulled out my credit card and got the download, and ended up devouring the entire thing in one sitting.

I don’t want to give away the content of the book; if you’re interested I highly suggest that you buy it. But the general idea is this: You have to invest in yourself and build your specific, concrete skills. If you make yourself into a valuable resource, able to do X, Y, and Z, and sell yourself as such, you’re going to have a much better time than if you present yourself as a smart, potential-filled, but unspecialized college graduate, and wait around to be saved by an employer who’s willing to train you.

This was all stuff that I’d kind of, sort of, gradually started to figure out on my own. I was stumbling, slowly and circuitously,  but steadily in the right direction. Reading James’s ebook helped me fast-forward and skip right over what probably would have been at least a few more wasted blunder-years. Reading his book was one of the better decisions I’ve made in my life.

And the winning career path is…

That night I did the classic laying-in-bed-unable-to-sleep-and-staring-at-the-ceiling thing, thinking about what I’d read. The trajectory of my life for the past decade or so–everything I laid out earlier in this post–was clear now. This was one of those rare moments where it all seemed to make sense. It was a pretty amazing feeling.

But I still needed to decide what field I wanted to work my way into. Should I try to be like James and get into marketing writing–whatever that was, exactly? I thought of one of my former classmates whose first job out of college was writing ad copy to sell jeans. Was that my destiny?  I had so few tangible skills. Almost none, really. It’s going to be a process, I told myself. Finding the right direction will be the first challenge. I resigned myself to a long haul and tried to focus on falling asleep.

And then something clicked in my head and I had the answer. Norwegian. I’d been studying Norwegian for fun for a while. How many people speak Norwegian and are also native English speakers? Probably almost none. There’s no way that combination of skills wouldn’t be valuable. And I’d studied Spanish for six years in middle/high school, and German for three years in college. And I’d loved it all, and I’d been good at it. Foreign language-learning skills: I have them. It’s what I’m best at other than maybe writing; it’s what I love, it’s what I’ve been doing as a hobby for a decade; it’s what always makes me feel better about life. Ohhhhh yeeeeeeah, haha, THAT. Yeah, maybe I should go with that.

As soon as I’d thought of it, a language-based career seemed like the most obvious thing in the world. And, really, I had considered such a path before. But I’d always assumed that to be a translator or something similar, you had to be a native speaker of both languages. Which is a ridiculous assumption, because not that many people are natively bilingual, so if that was an insurmountable requirement there would hardly be any translators at all, and they’d all get paid like a million dollars.

I’m tempted to call myself an idiot for not realizing this, but as James says in his book: academia can instill this idea in you that you have to become an expert before you’re qualified to do anything. In the real world, you don’t have to be perfect (six-year PhD etc) before you’re allowed to have a job. But for those of us who aren’t so used to the real world, this can take a minute to realize, and until you do you’re sort of paralyzed by the feeling that you’re not nearly good enough.

And so, that’s the long and rambly story of how I came to be where I am right now, on April 4, 2016, publishing my first post here. This blog will document my quest to become a translator, on both logistical and more philosophical levels. First I’m going to focus on improving my German, starting from the intermediate level where I left off in college, and on learning Norwegian, which I can sort of read but don’t properly speak at all. Then I’ll move on to learning about the art of translation itself, and eventually I’ll take on the business side of things. Even if I don’t actually become a translator in the end, I’ll still, at the very least, be building my language skills beyond what I’d thought was my limit, and reactivating parts of my brain that I haven’t used in a long time.